Divest Herts wants the county council to stop investing its pension funds in fossil fuels such as oil and gas, which cause global warming.

..largely due to the release of greenhouse gases from the combustion of oil, coal and gas for energy and goods.

Global warming is happening now – it is not a thing of the future; thanks to our appetite for fossil fuels we’ve already experienced a global temperature rise of about 1 degree since the Industrial Revolution.[1]

Global Warming changes everything and we have to stop using fuels which produce high carbon emissions and damage our climate. 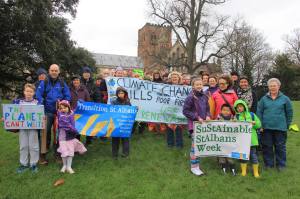 The effects of this rise in temperature are already being felt, causing more frequent and intense weather events, and more tropical storms in some areas, but drought in others. Climatic changes and oceans becoming more acidic due to absorbing excess carbon dioxide present a real threat to whole ecosystems.

It’s not just bad for the environment, it’s putting people’s lives at risk too due to food and water insecurity and is creating climate change refugees.[2]

In order to stop the global climate warming by another 2 degrees, 80% of all known fossil fuels must stay in the ground.[3] However, despite all the evidence showing that we need to transition to cleaner forms of energy, fossil fuel companies are intent on continuing to extract dirty fossil fuels, and making huge profits in the process.[4]

Recent fluctuations in oil prices means that divesting from fossil fuels would minimise the council’s exposure to the financial risk of the ‘carbon bubble’, whereby companies risk being left with stranded assets (worthless fuel stocks that regulation will prevent from being burned).

People and institutions that own shares in the companies will see the value of their investments decrease. (5)

By removing investments in these companies Hertfordshire County Council will be showing its commitment to creating a healthy, sustainable future for both the people for Hertfordshire and the world as a whole.

Institutions across the world including churches and universities as well as local authorities in the UK such as Bristol City Council and Oxford City Council have already committed to divest from fossil fuels. [6] Let’s see Hertfordshire join them in making this small but impactful commitment.

Is your pension fund being invested in fossil fuels?

The Herts Pension scheme affects employees in all the local district councils and a variety of voluntary and community groups in the district – click here to see full list of groups affected by the pension fund.

Below is the Herts Pension Scheme Statement of Accounts – Page 56 describes the top ten investments, and pages 63-65 lists all the employers who benefit from this.