Divest Herts is part of an international movement to untangle our lives from fossil fuels.

Divestment campaigns from all around the world have been gathering momentum, challenging institutions such as universities, faith groups, charitable foundations and governmental organisations to remove investments from dirty fossil fuel companies. The value of institutions who’ve divested has now reached $3.4 trillion. 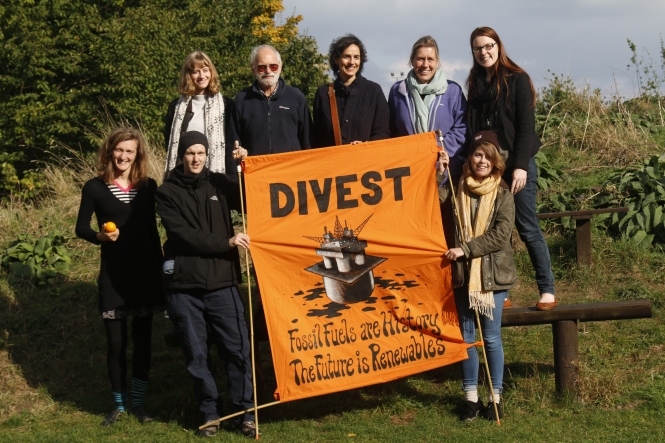 In October members of Divest Herts attended a Fossil Free UK campaigning weekend to work alongside and hear from others who are working on similar campaigns across the UK. Teachers, retired people, architects, and students were among those there – from Glasgow, to Sheffield, Yorkshire to London, all of these people had been brought together for a common goal: to campaign for a future free from the shackles of the fossil fuel industries.

Campaigners from Divest Herts were able to learn from those who had already made significant headway in urging their councils to divest. Divestment campaigners and Councillors have persuaded Waltham Forest, South Yorkshire and the council in Haringey to make commitments to removing pension fund investments out of fossil fuel companies.

The weekend was coordinated by 350.org who are building a global climate movement, to which Divest Herts are proud to be a part of.

Emma Brading, a resident of Rickmansworth attending the weekend as a delegate from Divest Herts said:

“It was an inspiring and uplifting weekend – to be around passionate campaigners, who are just ordinary people volunteering their time to create a better future is a wonderful feeling. We had many valuable insights, and a really interesting history lesson on the origins of divestment in the anti-apartheid movement.”